A homecoming of sorts...

Mai soong kha!
I wish I knew how to say "It has been a very long time" in Shan/Tai Yai. Maybe I should learn...

It has been very long, a few years in fact, since my last post. But it is time to say welcome back to All about Shan Studies. The past few years has not only taken me on different paths - some closer to Shan State and Burma/Myanmar (in fact, I spent a few months there last year) and others further way (like my current location in North America) - but I have always found myself returning to the Shan, continuing to follow news, insights and research and eager to participate. Maybe this post will be an re-awakening of sort.

I certainly hope so.

Most of all, jom li kha for staying with me, being patient and coming back!

An Introduction the World of Shan Manuscripts

Throughout my hiatus, things have been moving swiftly ahead, even if I haven't been highlighting or commenting on them. Whether conferences, publications, videos or more, the Shan State continues to build its profile with those interested in its inner workings, its people, its culture and more, and much of this has taken place outside a public relations/media boom related to more political and economic things happen in greater Burma/Myanmar. While I am overjoyed at the wider and deeper focus, I wish to continue to focus my efforts on the Shan State alone and leave the more broad conversations to others.

And what way can be better to advance this thirst for and desire to share knowledge than to promote the rise of Shan manuscripts across a number of institutions worldwide. But this is not a new phenomenon nor is it a surprising outcome for a culture that has a deep and detailed tradition of producing literature, most in manuscript form, over the centuries.

Others are far more adept at speaking on Shan manuscripts - their production, history and significance (see the SOAS link below) - so I will leave the details and explanation to them. Rather, I'd like to highlight that many of these manuscripts, previously unknown or locked away for safekeeping, are now available in digital form, allowing better access for a wider readership worldwide. While the production of new manuscripts is faltering today (there are various reasons, many of which I would rather avoid underlining), but much has to do limited contact between those who can teach and those who want to learn; this is also due to a general decline (forced, by necessity or through coincidence) in Shan learning and usage. Regardless, Shan manuscripts that were previously found only and across Shan State, mainly in Buddhist monasteries but also in private homes, are now available electronically.​

The UK is a leader in the preservation and promotion of Shan manuscripts, led by diligent academics and others at a number of universities, including Cambridge University Library (over 400 texts catalogued by Sao Saimong Mangrai, a Shan scholar) and the Bodleian Libraries of Oxford University. Others are held in British Library (Special Collections) and in the Library of the School of Oriental and African Studies (SOAS) at the University of London. Other special projects, such as those to catalogue Shan manuscripts (e.g. the SOAS-based Shan Buddhism at the Borderlands project and the Oxford’s Bodliean Libraries-based Revealing Hidden Collections project) as well as an exhibition of digital images of Shan manuscripts (via the SOAS Archives)  have greatly supported efforts to promote Shan manuscript management and promotion.

For now, we can be comforted in a resurgence of interest and support in Shan manuscripts and hope that it continues.

Another year, another great celebration!

Mai soong kha!
Welcome back to All about Shan Studies. Although it may have appeared that we have disappears - taken a hiatus perhaps? - it's just been the usual rigmarole  about this, that and everything. We are still here, always in spirit at the very least.

Once again, it is that time of year. Not just for Christmas-related and other festive elements, but of an equally important event: Shan New Year or Pii Mai Tai. And, once again, my alma mater, The School of Oriental and African Studies (SOAS), is set to be the host of this great, important and fun event, the spot for Shan enthusiasts and others in  and around London in early December to come together and celebrate. You won't want to miss it, and we hope to see you there. 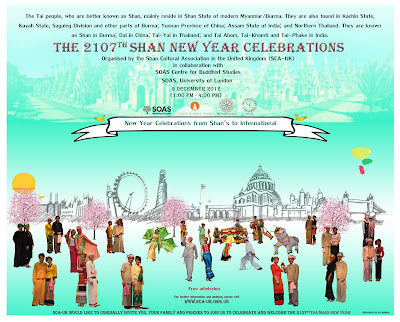 The Shan are the predominate ethnic (minority) group throughout the Burma/Myanmar's eastern states (Shan State, Kachin State, Kayah State) and numerous into Yunnan Province (PR China where they are known as the Dai), Northern Thailand (where they are called the Tai Yai) and Assam State (India where they have several names, including Tai-Ahom, Tai-Khamti and Tai-Phake, though this last moniker is unknown to me.

Held in London (and the UK) since 2005 and from 2006 at SOAS, this year's Shan/Tai New Year celebrations have grown in popularity ever since. Promoting and celebrating Shan culture, the festivities are led by the The Shan Cultural Association in the United Kingdom (SCA-UK) who will once again put on a comprehensive and enticing programme of Shan/Tai culture to ring in 2017. We fully recommend the dances and music - events that should not be missed.

Everyone is cordially invited to come and enjoy the festivities of the 2107th Shan/Tai New Year.

Please visit the Shan Cultural Association in the United Kingdom (www.sca-uk.org.uk) for details.

Until then, jom lii kha,